We are both up early this morning we must be keen to move on.

What is it about a holiday that makes your body believe that it needs so much food in the mornings? At home I’ll have an egg or two but here my craving for a Filippino breakfast begins before I wake up. There must be better things for a man to dream about as they wake up!

My native breakfast this morning is a piece of dried milkfish, 2 fried eggs, garlic rice and mango juice at the Alona Hidden Wet Dream just over the road. A weird combination at any time of the day and I am not entirely convinced that the average Filipino would eat this for any meal.

Once sated and safely checked out ( a day early) we jump in a trike for the journey back to Tagbiliran port and hopefully sanity.

We have tickets for the 10.30 ferry sailing to Siquijor Island via a brief stop in Dumagete, Negros. Siquijor was on the shortlist the last time I was in the Philippines but it and other destinations lost out to Biliran which proved to be almost completely un-touristed. I am told that this has changed in a major way. Anyhow with only 3 weeks in an archipelago of over 7000 islands you can only literally scratch the surface. 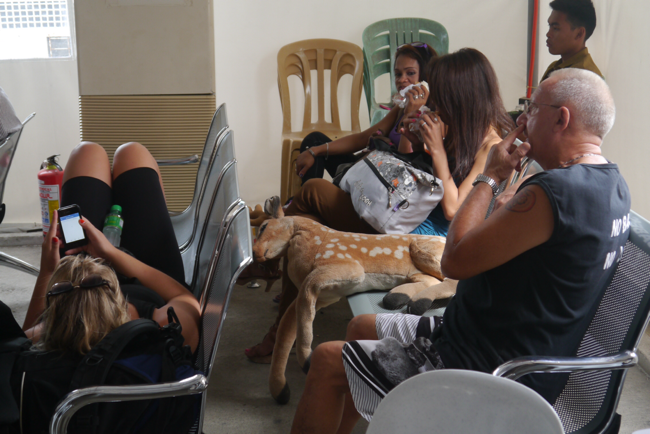 Coming back to the ferry port our trike driver gives us a running commentary on the damage sustained in the major earthquake of 2013. Much of the interior suffered in some degree and according to our newest font of knowledge one of the chocolate hill was “broken”.

Evidence of the quake is obvious at the port itself with temporary marquees replacing the collapsed terminal buildings and ominous cracks snaking across the car park.

We meet a retired gentleman on the ferry crossing who like all Filipinos is happy to share his knowledge of his locale. He so highly recommends the island of Guimaras just off the coast of Panay that we consider changing our future plans and ending our travels there before re-entering the morass that is Manila.

They say never about it but the conversation with our new found elderly statesman turns towards politics and we get a vivid illustration of the not so quiet admiration of and desire to return to the conditions under Marcos. Despite the rest of the world remembering Marcos as a despot our friend focusses on the undeniable good the erstwhile President did in his early years. It seems that blinkers have been drawn over the rest of the actions of the dictator and his wife including the spiriting of billions of Dollars into Swiss bank accounts and Imelda’s jewellery binges in Geneva spending $12 million in one day.

Our friends interpretation as to why Imelda Marcos required the exclusive use of a jumbo jet and 13,000 pairs of shoes is remarkable. She was personally responsible for connecting the Philippines with China and the rest of the world and single handedly supported the Philippine shoe industry. No doubt what you believe depends very much on where you are from. 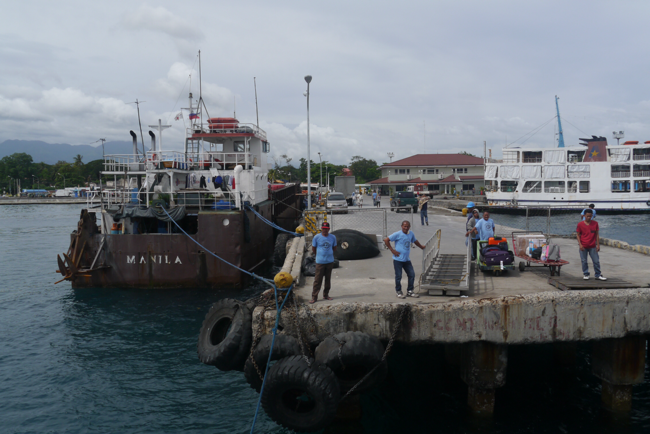 We say adieu to our friend as he disembarks in Dumagete, Negros where the ferry bobs up and down for a while  before making the 30 minute crossing to our destination. It is clear from the moment you step down from the ferry that Siquijor is somewhat more laid back. Sure the rickshaw drivers are on to you immediately but they do it “slowly”. We hop into one and 250 Pesos later we are at the gate of the Coral Cay resort, Solongon where we booked a room by ‘phone the day before from Alona. 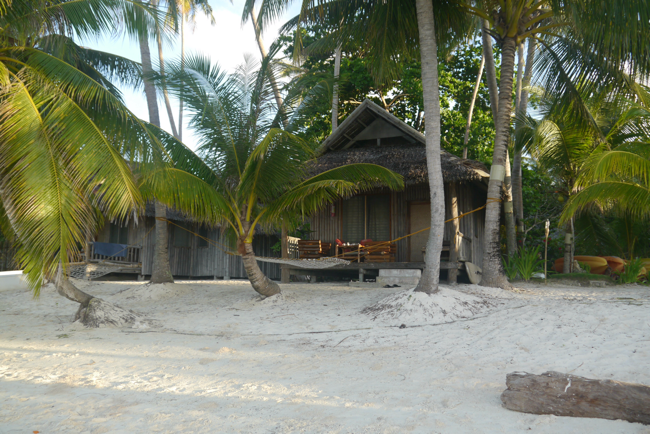 Now this is more like it. Wood and atap cottages cluster round a central bar and restaurant sitting on a raised bamboo floor. All of it backs onto a light sand beach and as the resort is on the western side of the island the sea is very shallow and like a sheet of glass. 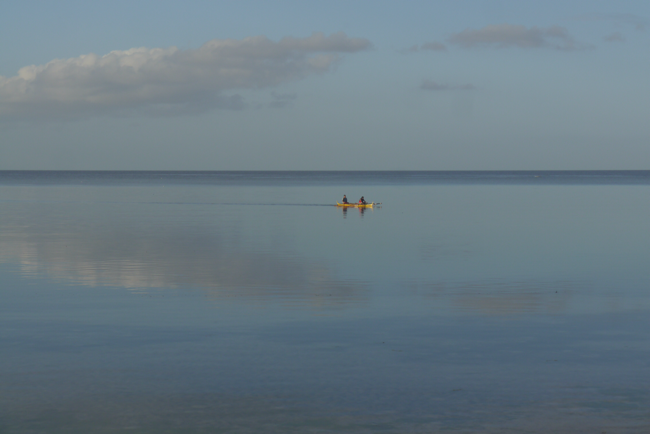 You have to get used to last minute changes when travelling the Philippines so the choice of room we had last night has morphed to one night in a small garden room at the back of the resort and then another 2 nights in a larger cottage on the beach. Never mind, this place looks good and feels perfect for a couple of days chilling. The weather however has followed us, the skies are looking very grey indeed. 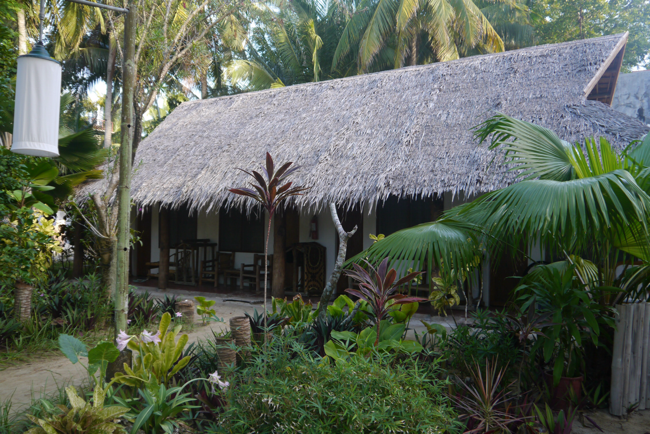 The sea is so calm because it is no deeper than knee height for more than 200 metres out. Wading out looking for snorkelling I have to be very careful as the sand underfoot is clustered with evil looking inky blue black Sea urchins with long spines that quiver when you are close. Stand on one of those and you’ll know it!

Eventually, perhaps 300 meters out the water is deep enough to snorkel. There are isolated patches of coral with the usual pretty little fish hovering around and patches of anemone with ever entertaining clownfish but the stand out sight is something I have never seen before.

Starfish are everywhere in the tropics. The most common here is a ruddy beige animal with large blue black humps that look like thorns. I saw a local handling one off Alona beach so know them not to be harmful but you would not want to touch one. These critters are everywhere on the sea floor as are the beautifully star marked shells they leave behind once eaten.

So what eats a butt ugly starfish armed with what looks like rose thorns? I swim over the answer and float watching the drama unfold. Below me about 2 metres down are a group of enormous (about 20cm in diameter) black spiny urchin with electric red zig zag markings that can best be described as like the face make up of the Sith Lord in Star Wars that kills Qui Gon (apologies for the spelling).

These urchins are simply evil looking and there are about 20 of them lying dormant on the sea bed. Two of them have found a starfish and a slow motion struggle for life has begun. The long spines of the two urchin facing the starfish start to quiver frantically and oh so slowly the urchin move towards and over the as yet unaware starfish. Suddenly in slow motion (I know!) the starfish realises that something wants to eat it, raises it’s legs a little in the direction it wants to travel and almost imperceptibly make a mad dash for it.

It works for a while as it manages to free it’s trailing legs from the 2 marauding urchin who realising that their prey is escaping vibrate all of their spines to relocate their lunch then down shift their gears to overcome the hapless starfish. I leave as the urchin cover the starfish and settle down for a long, slow banquet. I leave making a mental note to google these urchin when back at the shore. 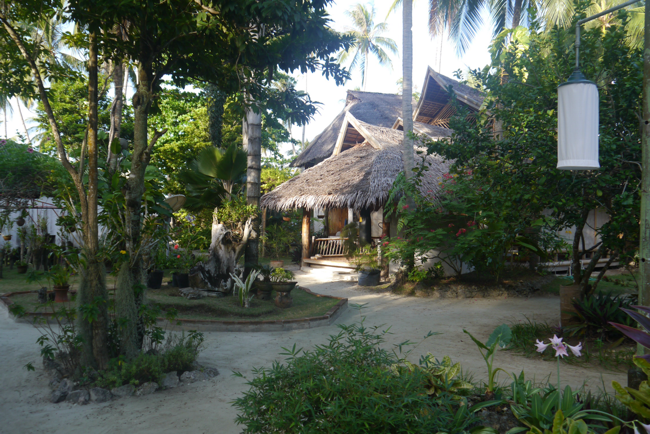 Night arrives with the clouds parting momentarily to give at least a notion of the sunsets for which this island is famous for before we browse on refried Lechon for dinner. After of course the requisite number of Gin/Tonics.

Apart from the noisy American and his Filipina floosy (more in tomorrow’s post) the night is still and glorious. The clouds have gone and we have a wander up the beach to admire the stars, look out for fireflies and to marvel at the sea that looks like a mirror reflecting the crescent moon.