OK, today is a day I have been fearing for the last ten years. The same amount of time in the past a very good mate of mine and I made the journey from Alona beach to snorkel over the reef at Balicasag Island and came away stunned with the experience.

I apologise but I have to dwell on the past for just a while longer. Balicasag back then had a backdrop of a thick layer of multicolour soft and hard coral on the edge of a steep drop off upon which play layers of fish. Top layer were the vividly coloured swarms of small fish I so much want to call Tetras but know they come from South America. Below this are the damson, angel and parrot fish in such impossible combinations of colours along with clown fish (Nemo). Below this and at the limit of a snorkeler’s visibility an endless shoal of trevally jacks that patrol the reef like North Korean soldiers at a parade. Even further down are the shoals of bubbles from divers viewing even more wondrous sights.

So there you have my problem. I have been bleating for years about how good Balicasag was and now I’m on the cusp of doing again I have fingers crossed that today will be as good.

So back to today. We have arranged to meet Shimon and Mor at their hotel the Harmony at 8.30. The weather has closed down with grey skies and a stormy feel in the air. Shimon has organised the trip and the boatman is waiting in reception.

I say boatman but the reality is that the guy waiting for you is to direct you to the boat just a few metres away on the beach. He’s the “fixer”. His job is finished when he shows you where the boat is and retires for a well deserved lie down. 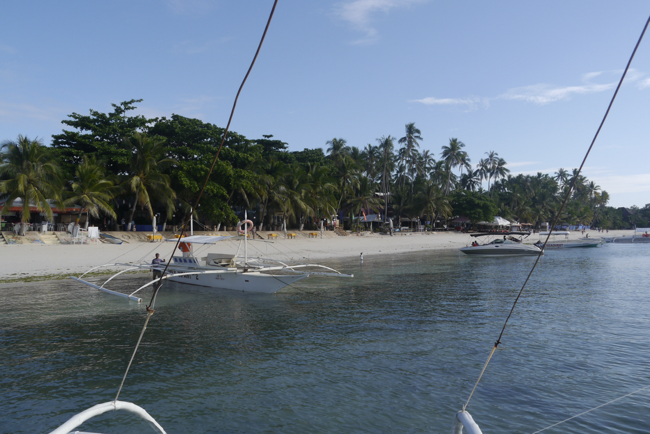 Our boat is the El Niño de Panglao and is staffed by captain Dizzie Rascal and his younger brother mildly disoriented. As with all Filippino male youth they are mostly concerned with how cool they look. I’ll give them credit the chunky Ray Bans with the oil slick lenses are cool but he fact that they look like a combination of the Fresh Prince and a toilet brush is beyond them. El capitano is Rex and his younger aspirational sibling is Hilton. Hotel and Paris jokes fly right over.

The cool captain and sibling. 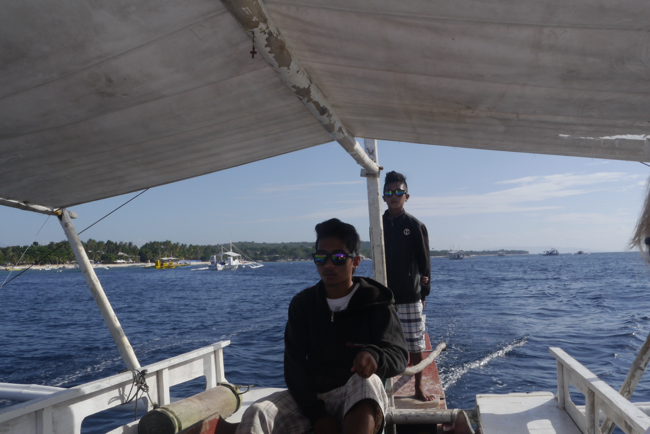 It’s a 45 minute boat ride to Balicasag and we spend time getting to know Shimon and Mor a little better. They live in a suburb of Tel Aviv he being into high tech electronics (whatever that is) and she is a social worker. Their English is not well developed but is somewhat superior to our Hebrew.

We arrive at the almost perfect little circle that is Balicasag and the mystery of why we are being asked to pay 150 Pesos for a “guide” is solved. The rules have changed. Banca boats are no longer allowed on the reef but moor just off the beach where you are deposited into a small 4 seater outrigger canoe that is paddled out to the reserve which is now cordoned off by a line of buoys. From this small vessel you jump out with only a vain hope of being able to get back in. I’m sure it’s just another way of extracting the tourist dollar but it does stop the reef being further damaged by anchors being tossed about. When I was here before the boat chugged up to the reef and we simply jumped off.

The corals at Balicasag have, in common with the rest of the world, been affected by Typhoons, bleaching and temperature change. Around half of it is dead and when coral depletes the fish numbers dwindle. The spectacle at the head of the reef may not be so eye poppingly glorious as it was before but I am redeemed in my wife’s eyes as the 50% of coral that remains is utterly fabulous and the fish species are in a bewildering variety of vivid electric colours. 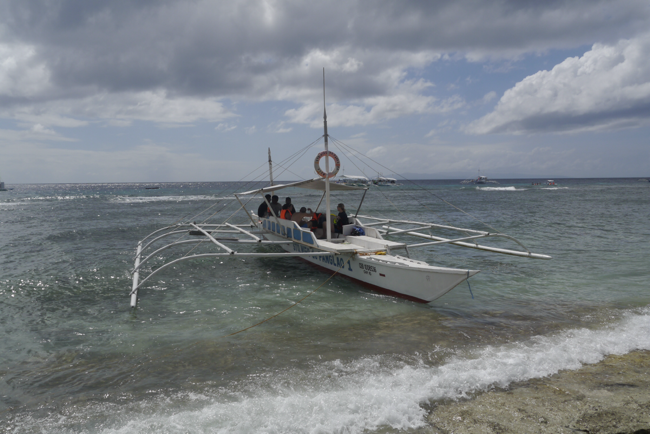 We see our first clown fish of the trip. They are so protective of their little bit of anemone that they rise up to almost in front of your mask to “blip blip blip” their disapproval of your presence. They are one of the most endearing little creatures to see up close. Big Parrot fish bob up and down on the reef using the beak for what they are so aptly named to break off and crunch small pieces of hard coral before shitting out a previous mouthful in a find cloud of coral sand. Those magical white beaches have to come from somewhere!

Fish will swim close by on their sides. They are just eyeballing you but you get the best view of the intricate and colourful patterns of fish totally free from predation. Under all of this the Jacks that remain school and prowl up and down.

Occasionally you will come across small clouds of minuscule shrimp far too small to see individually. Other clouds are just the stinging tips of small jellyfish that have been munched previously by fish lower down the reef. You are stung often drifting over a reef but it’s more of a tingle really. One tip catches my upper lip, this hurts a little more. We bought tight fitting scuba under-shirts in the UK to guard against stings. I can’t say that my middle aged belly looks terribly flattering in it so “suck it in son”.

The effect of all of this sub aqua activity is to make a type of “white noise” in the water that is quite difficult to describe.

It’s been an hour over the reef and drop off and time to start the ungainly process of getting four large adults back into a toy canoe to be paddled back to the shore that would take all of 2 minutes to swim. Once back at the shore we wade our way through the vendors of tacky souvenirs back to the banca.

Rex our oh so cool Capitane is reluctant to steam around the other side of the island quoting “large waves”. Clearly he wants an easy life and as I know there are dive sides around there we insist. There are no “large waves” but there is quite a drift current so Rex moors up on a buoy and we agree to be picked up at the dive boats at about 200 metres yonder.

The snorkelling here is different to the reserve. Small coral heads dot a sandy bottom around six metres down. Brightly striped fish hover effortlessly over the coral clumps. Over to the left is a bank of sea grass and where you find that you often find turtle and sure enough we spot one of these magnificent creatures languidly swimming out to sea. We follow it for a while before the boat arrives to pick us up.

Whilst the others are clambering aboard I watch dive instructors below teach their pupil how to cope with their mask being unexpectedly ripped off. I have always resisted scuba as it ties you too much to one spot and divers are so much of a “clique”. Besides until recent years you could see enough just floating over the reef. With coral and fish so drastically affected on top we agree that on the next trip to the tropics we will be armed with open water certificates.

Our next destination is Virgin Island a privately owned spot in the ocean with a sand bar that at low tide snakes into the sea. Rex beaches the banca and we stroll up the sandbar past small shack stalls selling illegal shells, sea urchins (they taste like salty snot), pearls and banana fried in coconut oil, the latter proves delicious. 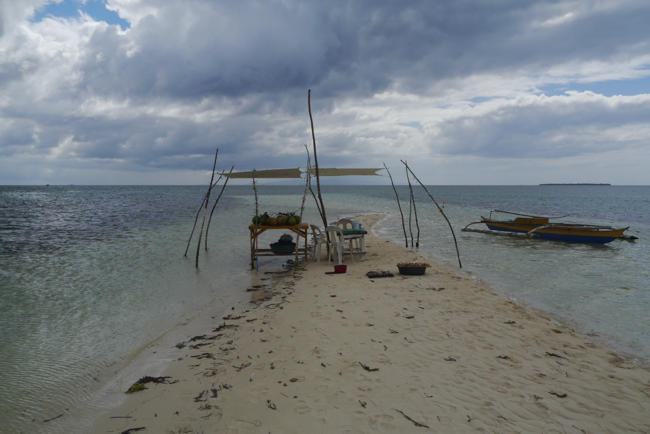 The weather has been closing down on us and there are ominous clouds all around. We had spots of rain in the sea earlier while snorkelling but as we are furthest from the boat and cover it rains as it can only rain in the tropics: suddenly, without much warning and with such intensity that we are all soaked in seconds. 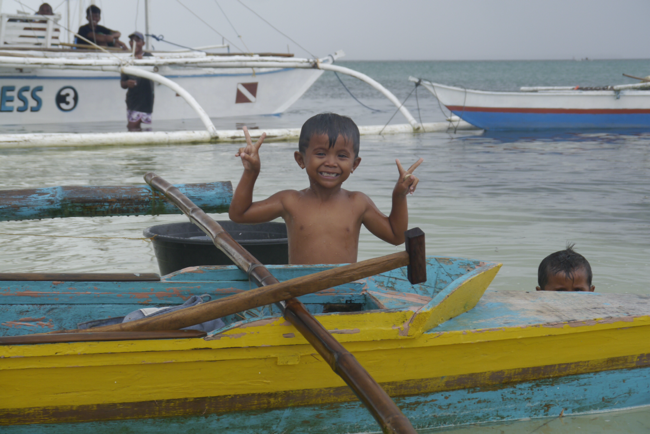 It stops just as suddenly but further outbreaks continue to drench us as we are chugging back to Alona. Rex reaches down and hands us a dirty plastic tarp. It stinks of fish and oil but we are all grateful for the cover.

Apart from a visit to the beach to take photos we are both determined to avoid the experience of last evening so head just over the road from our lodging to Helmut’s Place for a beer. As the name suggests this little bar is a haven for all things German. A bunch of clearly Teutonic guys prop the bar with their tiny little giggly Filipina consorts hanging on their arms and every word.

We booked three nights at our accommodation but we have made the decision to move on in the morning a day early with Chris happy to forgo the interior of Bohol. Neither of us relish the thought of another night in a crowded noisy resort so it’s off to Siquijor tomorrow.