Today’s plan is quite simple. Kick off our sandals, relax and do n’owt but enjoy the laid back vibe that is Port Barton. I can also catch up with my diary.

The genial manager of our basic but perfect lodgings has been telling me more about Sabang the little Barangay (Village/Township) that so enchanted us the last time. Apparently I would not even recognise the place now. The beach has been cleared of trash and is now pristine – good, Metchi’s the little group of cottages at he end of the beach where we stayed the last time has gone – bad. It has been replaced by along with others with large resorts among which Sheridans a flyer of which he shows me. Very nice I’m sure but not the Sabang I remember.

It’s a shame but no real hardship as Port Barton is an easy replacement and the memory of Sabang will remain. Port Barton is a typical asian beach town with a long sweeping curve of fine sand fringed by coconut palms fronting warm azure waters where small banka boats bob up and down. 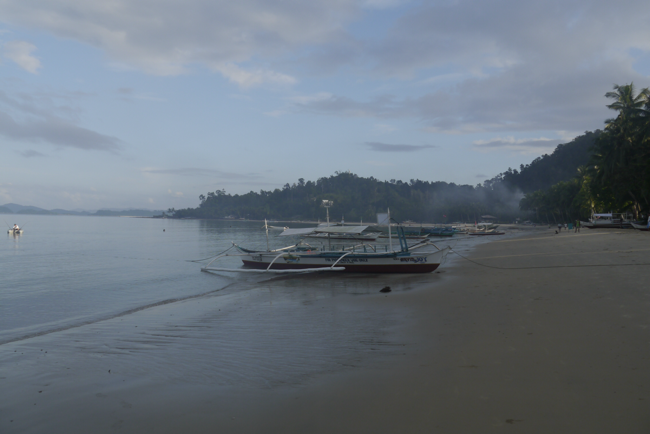 A small number of lodges exist offering cottages with varying facilities and views ranging from ours at around £5 a night up to about £30. There is a choice of about 6 or 7 places to eat overlooking the ocean and that’s it. No speedboats, jet skis, stupid banana boat rides or beach touts. Oh and just to rub it in the weather is glorious with the temperature hovering around 32c with a cooling gentle sea breeze. I can think of much worse places to be right now. 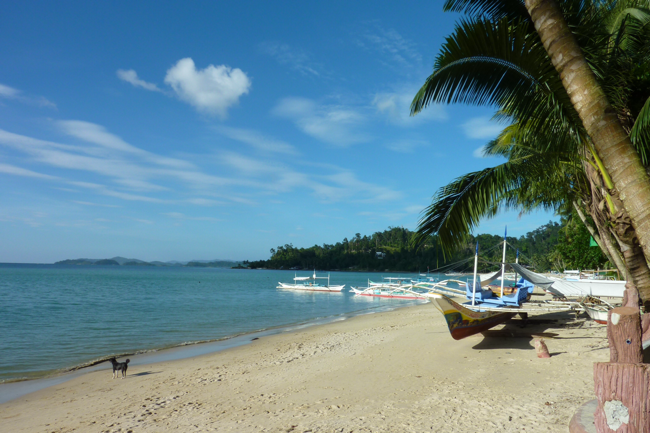 We must have made the right decision on lodging as the oh so beautiful Swedish couple who braved the same jeepney getting here arrive to check in complaining that the top end of the beach was noisy.

So a late Philippino breakfast of fried fish, fried egg and garlic rice, weird but delicious, followed by the rest of the day stretching out on the hammocks on our little balcony watching the world go by. However, I know my wife too well. On my morning walk up the beach while wifey was still snoozing I spotted some kayaks for rent so after a while of lounging I drop the idea and 30 minutes later we are paddling off into the blue yonder in a bright yellow double kayak. 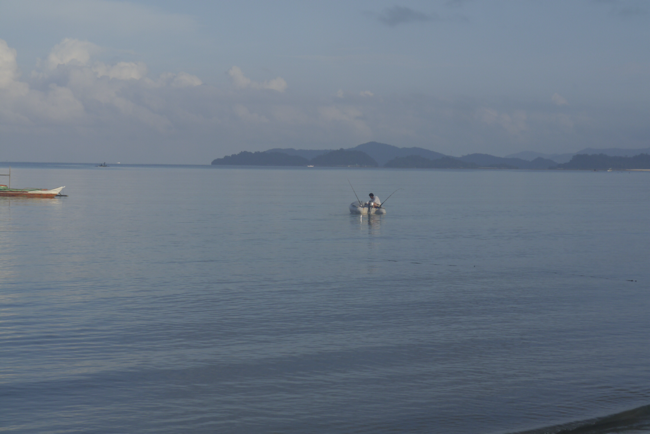 We are told by Richard owner of the Barton Bistro and renter of our kayak that there is reasonable snorkelling on the sandbar some 2km off the beach then on the two islands reef another 3km further on.

It’s been a while since I have been in a kayak and I soon discover that the necessary muscles have forgotten their memory. I’m constantly chastised for losing the rhythm, bashing her paddle and pulling too much to the right. Mind you I must remember that men can’t multi task and I have never been nagged before on the Philippine sea.

The sand bar is only visible as you approach it where it rises into view like a big white turtle. it’s just a dot in the sea surrounded by shallow water that flies away for a few metres in every direction before falling away vertically. The drop off is so sudden the water changes from pale to dark, inky blue in an instant.

There’s no real hint that there is anything to see at all but there is sea grass so there is the chance to spot a turtle. The sand is dotted with small chunks of dead coral making it difficult for Chris to get into the water at all. She declares that there is nothing to see. With my reef shoes on I press on relentless.

At first close by the drop off there is nothing to see but sand, sea grass and the odd crown of thorns a butt ugly mother of a starfish with huge thorns an its back and legs. This little mother specialises in chomping coral relentlessly from the reef so where they are there must be coral. 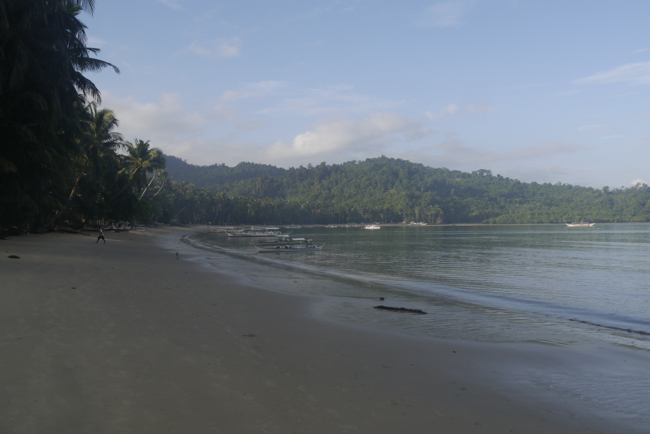 Sure enough further on is a huge bank of both fan, staghorn and brain coral. It’s mostly dead or dying but it’s far better than El Nido with clumps of vibrant colour. However, as with EN there are very few fish. I am to learn later that the fishermen in Port Barton are yet to learn that they can earn more from taking a tourist to see fish rather than catching them for the slab. They continue to use cyanide on their fishing grounds. The reef is smack bang in the middle of the routes for three fishing villages.

We could stay in Port Barton for another few days but last night the internet speed was sufficient to book a flight on Sunday from Puerto Princesa the capital of Palawan to Cebu and to continue our travels. Neither of us are looking forward to that journey tomorrow on the very same hyper cramped bus that delayed us inbound by being so stuck in the mud.

So, lucky for us Richard from the Barton Bistro has hired a van to take his family back to the airport for their return to work/school in Manila. They are happy for us to squeeze in and share the cost. It’s still double perhaps triple what we would pay on the bus but infinitely more comfortable.

So another night in Port Barton where the only decision to make is beer or Gin & tonic. Gin wins the day and we head for the hammocks facing the beach at Elsa’s restaurant where we had a passable meal the previous evening that took almost all night to cook. Don’t come to the Philippines if you are used to snappy service. 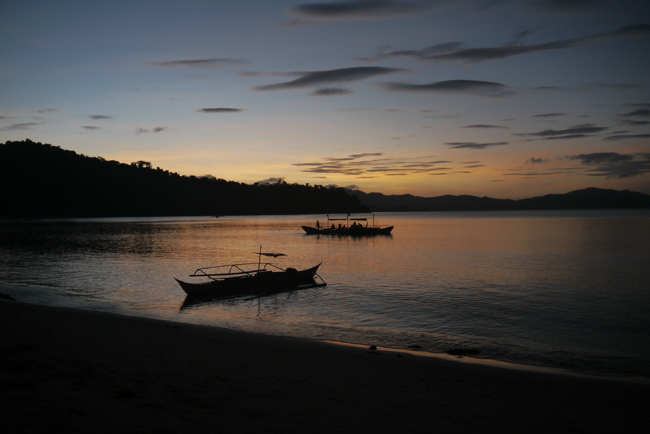 As we are sipping a table is being set next to us with fabulous lobster and salad. It’s the Swedes again who boasted earlier about buying lobster from a local fisherman which were going to be cooked up for them on an camping trip to a nearby small island. Bjorn the handsome told us earlier that the Swedes only eat lobster at a certain time of the year. I thought that was the Crayfish festival in August. The time difference between Sweden and the Philippines is great indeed. Agnetha the beautiful wafts by with her nose above her forehead.

We, not wanting to repeat the glacial and rather uncaring service of the previous evening head a few metres up to the Bamboo Lodge where we have been taking good breakfasts with real bread.

There are many uncared for dogs in the Philippines and Port Barton has more than it’s share. One of the town’s bitches has 3 cute pups, looks half starved and has a doughy eyed look like the cat out of Shrek. Just as a shrewd beggar she uses the Antonio Banderas look and babies to extract food out of the table of cooing French girls across the way.  Once their bill had been paid she was straight over to us for her share of my squid adobo. No chance but Chris is happy to share hers. Do dogs eat rice? Over here they do!