We have decided to change our plan to visit Sabang and head down to Port Barton instead which all of the guides describe as laid back and picturesque. To ensure we get there before dark we have to catch the 7am van to Roxas where we then switch to the daily jeepney to Port Barton at mid day. So here we are just after 6 snacking on one of those delicious and filling breakfasts I described in a previous post.

The van leaves from Coron Coron the next village down from EN on the way south. To get there we jump in a trike and 50 Pesos later we are deposited at the “main” bus stand.

The “van” is a twelve seater Toyota which is used extensively round the Philippines for short haul transportation. Another option would be to take the bus which will be a fraction of the cost but that stops at every corner and is always packed to the gunnels with passengers spilling out onto the roof. 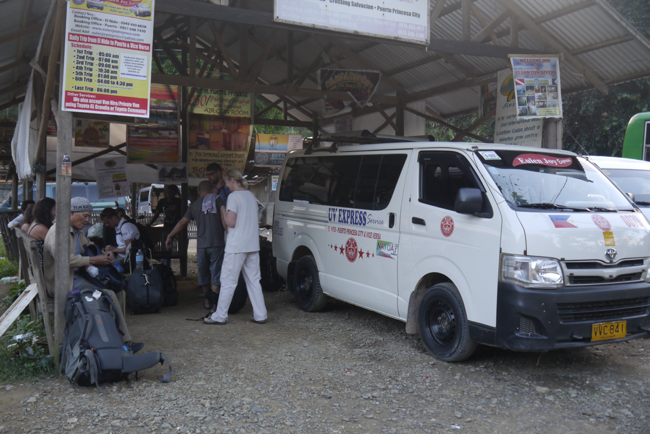 There is a saying in Tagalog “Bahala Na” which can be translated in various ways including “what will be will be” but this morning it means “the van will leave whenever” If you are a stickler for time better not come here.

Whilst we wait for the van to depart a fairly sizeable group of travellers gather. It’s clear that many made the same booking in previous days and are moving on down the island this morning. There will be a number of vans leaving and we make sure we are on the first one.

We leave 25 minutes late and here’s the first surprise: apart from the odd section under construction the roads are all smooth concrete. When we were here before they were little more than smooth dirt tracks and the journey we made up from Sabang to EN took a bone crushing 10 hours complete with steering rack problems and 3 blowouts. The final tyre departed it’s mortal coil roughly where we are setting off today for Port Barton.

You look at the distances on the map and are surprised that it takes so long to achieve them. Roxas is 131km distant and whilst the new road is good the speed is not great and it takes 3 hours to reach our jumping off point. The views of El Nido bay as we climb up into the jungle are simply stunning in the morning light.

Roxas is a fairly sizeable town and we will see none of it as we have just under an hour to wait for the arrival of the Roxas Port Barton Jeepney. The group of travellers have thinned substantially as they disperse to their different destinations and we are left with around a dozen or so westerners in a fair crowd of Philippinos waiting for the jeepney. The westerners prove to be a broad mix: a Belgian guy with his Columbian girlfriend, an Italian couple, several spaniards and a Canadian guy who’s every third word was a nasal “Awesome”. No French though, they have better ways to travel.

The inbound Jeepney, well more of a cross between a jeepney and a big van arrives from Port Barton and it is packed with almost as many passengers on the roof than inside. There are clearly more passengers wanting to board than there are spaces so as you cannot book a seat on it’s European plan number 1: send the women in with the small bags first  to reserve the seats while the men hand the rucksacks up to a guy on the top of the jeepney.

The Philippino plan number 1 however is to ignore all bags and simply dive in the vehicle then shout instructions from within. Chris however is very tenacious and she resists all comers making a bid for the space next to her. Others within our group are not so lucky and several of the men and some women end up on the roof. I want to be Sir Galahad and offer my seat to one of the ladies above. I am firmly told to grow up and act my age. Not quite sure how to take that! So with the struggle no images of the jeepney but they come a little later.

So we’re in the Jeepney now what? Well the driver goes off for lunch an a lie down. There is little point in getting out as there are hungry eyes on your seat so we sit there for an hour while our man fills his tummy and has a rest. We are later to discover why he needs his rest.

We set off at the requisite 20 minutes late and after a fuel stop where diesel is under half the price than in the UK we are finally underway.

Roxas is on the main highway between Puerto Princesa the capital of Palawan and El Nido and between the two the road is generally good. Palawan is a long thin island and Port Barton is on the opposite side to the highway. The road east to west as we discovered when we were here before are not good.

The junction between the highway and the Port Barton road comes up very quickly and from there the road becomes a gravel track then well just look at this photo. 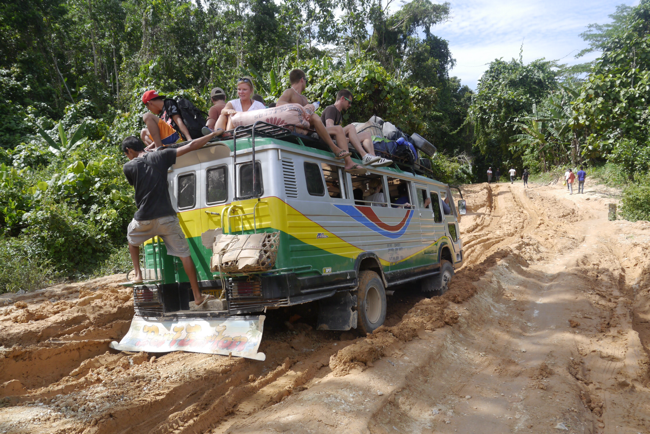 The jeepney gets stuck in the wet cloying mud ruts several times. This is meat and drink to the Philippino crew who simply jump out and dig around the stuck vehicle. We all jump out with cameras in hand.

On one occasion the driver gets it so deep in the mud by driving and reversing that it will not move at all. Again, all in a days collective work, a passing Land Cruiser leapfrogs and uses it’s winch to pull the empty jeepney out of it’s predicament. They have clearly seen this all before.

Then we come across a stranded vehicle of a different order of magnitude. The main Puerto Princessa to Port Barton bus has got itself stupendously deep in what looks like a river of mud. We cannot pass. We all bundle out yet again cameras and videos in hand.

Both the bus and jeepney crews spring into action. It’s clearly futile to try and dig it out as its too deep so from the jeepney they unload what look like enormous flat head nails and start to “hammer” one of them deep into the mud some distance behind the bus. With the “nail” sufficiently deep in the ground they tie a rope off then loop it around the back tyre of the bus. When satisfied the bus driver reverses the bus using the thick rope for traction. Unfortunately it has the reverse effect to desired and the bus simply sinks deeper.

Despite the mumbled advice and opinions of the western men lounging around the situation looks to us somewhat terminal. The bus has already been there for 45 minutes and we have been watching the rescue attempts for the same time. As we are debating whether or not to gather our bags and walk the final 14km (madness surely) International Rescue arrives in the form of a tow truck with a huge metal rope winch. Virgil Tracy in Thunderbird 2 makes short work of dragging the bus out and our hero driver simply drives round the enormous rent in the earth left by the departing bus.

After all that drama the final 14km along with the numerous rents, ruts and potholes is small currency and an hour later we are pulling into Port Barton some ten hours after we left El Nido. Chris I think has never really believed me when I say it took ten hours to reach El Nido from Sabang and has perhaps thought that I exaggerate the difficulties in travel. I have no such problems now. 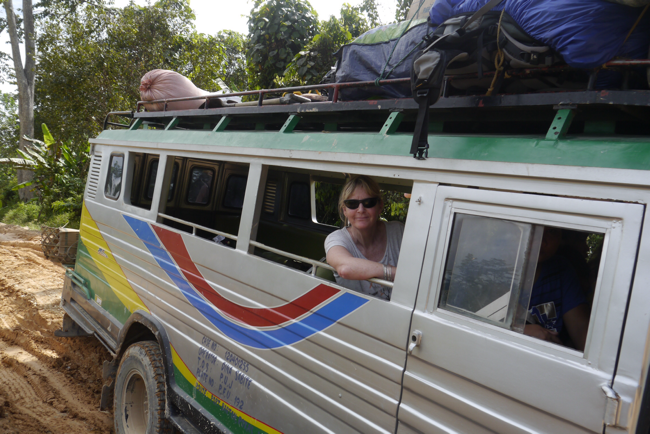 We have no accommodation so I stay with the bags as Chris flies off up the beach to find somewhere. We end up checking into a very basic but beautifully situated nipa cottage for 500 Pesos, roughly £5 a night. Most peoples idea of a nightmare but look at the view.