My “drink me” rhum bottle is still intact and we are up with the birds in eager anticipation of of the island hopping and snorkelling trip we organised back in the UK in the fear that because it’s new year they will all be booked in advance. In part this proves true but my knowledge of El Nido is based on 9 years ago and does not take into account the sheer number of banka boats now plying the trade.

Breakfast is included in the cost of our room but we are hardly going to write home to Mum about it. Powdered orange juice, 2 slices of what Bones might have whispered to Kirk: “It’s bacon Jim but not as we know it” and an omelette so thin you could use it to write home to your mum about your breakfast. Good coffee is quite rare here and so we drink this powdered concoction where they have thoughtfully included the coffee mate and sugar. Yuk.

The El Nido archipelago is quite spectacular and the only way to see it properly is to join a tour on a banka boat. The tours are split into four regions in the bay, all last a day and the to see the best of EN you need to take at least 2 tours. When we were here last time we were lucky enough to fall in with a group of fellow travellers before we reached El Nido which gave us the numbers to fill a boat. We convinced the Art Café to let us choose our own sights. There is no such flexibility today. You pays your money and you takes your choice if you want to see it all you take multiple tours. What we did not know in advance was the sheer number of Banka boats and operators to choose from. This proves problematic later.

Art Café tour A takes in some of the best sights I saw before. It kicks off with a visit to Miniloc island with the 2 lagoons, big and small, it then moves on to Shimizu island where we had spectacular snorkelling before. Lunch on the beach beside the hidden lagoon follows and the tour caps off with a visit to Ten Commando’s beach where there is a bar.

Tours start at 9 and the Art Café asks us to report at 8.30 so here we are being shepherded about by the Philippino equivalent of Gok Kwan. More about the Philippino ladyboy gene theory later. We are led down to a wooden deck near the beach where there are fifteen of us waiting. Three tours thinks I.

This is the Philippines of course and practically nothing starts or runs on time and some 30 minutes later all fifteen of us find ourselves wading waist deep out to this oversized Banka boat capable of taking all of us including 4 plastic Kayaks. 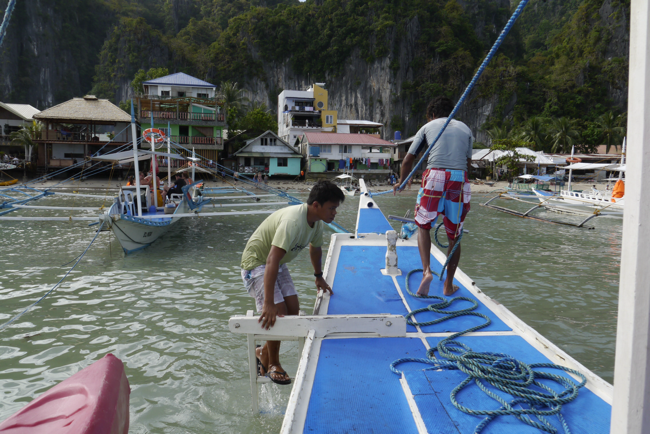 The potential  problem still has not lit up in my head.

The scenery around the bay of  El Nido is simply stunning. Vast outcrops of rain jagged limestone rise imposingly out of the sea around which there are uninhabited white sand beaches, coral reefs and spectacular lagoons formed by the action of the sea and rain.

The run out to Miniloc island is extremely scenic but as we anchor off of big lagoon and eight of us are deposited in their kayaks the light goes on in ma tête: The bloody boat is too big to get into the shallow water of the lagoon. This is really disappointing as one of the highlights of an EN tour is sailing slowly through the lagoons taking photos of the clear azure water against the jagged grey of the stone. Not so easy when you have to swim into the lagoon. Still totally mesmerising though. 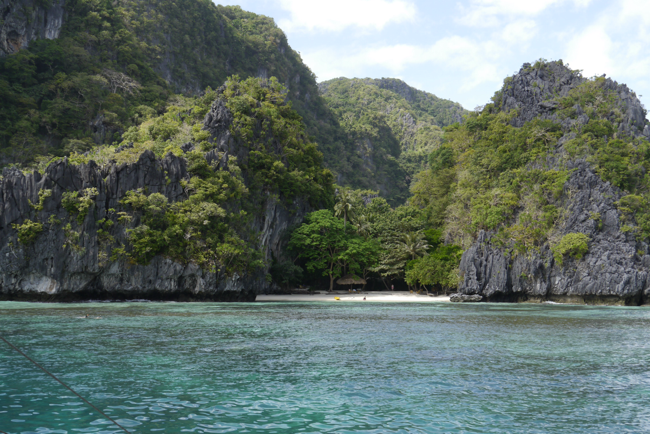 To make matters worse for us the lagoon is practically full of Koreans all wearing bright orange life vests and all jabbering away at full volume. Apparently certain asian nations will tell a boatman that they are competent swimmers seconds before entering the water and sinking like a stone.

Small lagoon is more beautiful and well.. smaller! This we all swim and wade into but the sheer number of boats now operating mean we are constantly being asked to move aside so that a smaller boat with it’s camera toting occupants can pass. Nine years ago we had the place practically to ourselves.

It is quite common knowledge that corals are dying because of sea warming and fishing. The advice is if you want to see corals do it now as in ten years it will all be dead. Last time the corals at Shimizu island were vibrant and there was a abundance of colourful tropical fish. I wrote “good snorkelling” in my notes at the time. Tragically most of the coral is dead and the clumps of live coral that remain simply cannot sustain the wonderful variety of fish that we saw before. It’s a real pity.

We are then back in the boat and off to the penultimate destination, secret lagoon beach for the provided lunch. We are left to clamber through a small hole in the rock wall that opens into a small but completely enclosed lagoon. Processions of boats arrive gorge their occupants for oohs and aahs in the lagoon before chugging off.

The boat driver clambers up a crevice in the cliff wall to a perfect and natural barbecue spot and light a fire. The smoke funnels up the crevice and away. His 2 helpers busy themselves chopping salad and pineapple.

We watch for a while before wandering up the small beach which seems to exist solely for the purpose of cooking westerners their food. Twenty minutes later we are tucking into very passable barbecued fish and skewered pork with steamed rice and salad. 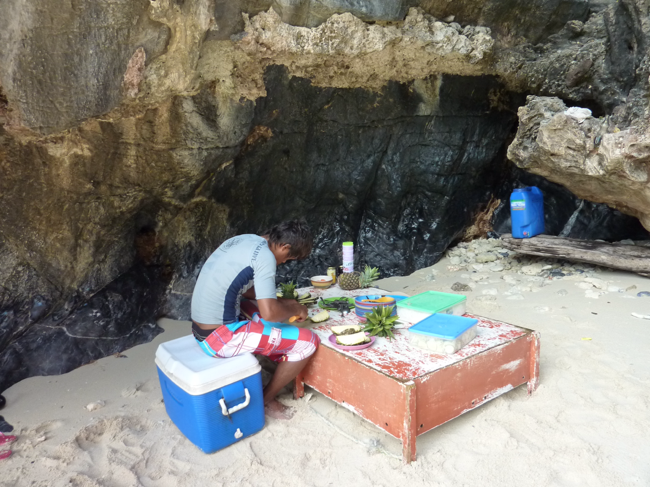 Final stop on the set itinerary is Seven Commando Beach a perfect little stretch of pure white coral sand fanned by swaying coconut palms. I guess the main reason for the stop is that it has a cocktail bar at the far end. A Margherita for her indoors and a beer for me later we are back on the boat heading home, very weary.

El Nido’s archipelago cannot be anything but utterly beautiful but it’s success and the current boom makes it a far less involving than it once was.

It’s New Year’s Eve so after a shower and an old git’s sleep we head into town (actually just outside our back door) for the night.

Just opposite is a pizza joint called Altrov´e who besides needing lesson on the correct position of accents have a wood fired oven and every night we have been here the line waiting to get in has been at least 20 people deep. I find it amazing, travellers fly half way round the globe and all they want to eat is pizza and pasta. A young guy later tells me that it was the best pizza he had ever had. Clearly needs to travel more.

The French have arrived in El Nido in force. There is a new bar and restaurant in town called La Salange and we heave in for a drink or two. Now I have to be careful here as I work for a French company, speak and rather like the French but abroad they do tend to enclave. Find a French restaurant anywhere in Asia and that’s where you will find the French. I supposed it stands to reason and I guess if there was something called an English restaurant that’s where you would find the Brits. Oh yes I’m reminded that’s called a bar…

The Salange is owned by five guys of which at least one is a Philippino as that’s the law. One of the French owners is from Poitiers he asks if we know it. We have driven through it is the reply which seems to amuse him for a while before returning to be typically French to other typical French. You have to give them credit, they know what they like, guard it zealously and go out of their way to find it. We have a couple of the huge happy hour vodkas where 1/6th gill measures do not exist and move on.

If you are British New Year’s Eve is all about drinking and these two Brits abroad have no intention of letting the side down. Now this is where my memory of the night begins to fade. I remember eating delicious barbecue chicken and paying next to nothing for it.

There were at least 2 bars after that before we realised that the streets were only full of Philippinos chucking fireworks about and if we continued on the spirits we may not make the next day so we bought a bottle of red wine (and yes before you ask it was French) and sat drinking it on the balcony whilst all around us the the absolute mayhem of an Asian new year unfolded.

Drunken texts home at midnight before bed at 1am.