Nearly ten years ago now I spent my first three weeks in the Philippines with a good friend of mine. We spent our time essentially in the Visayas, the central belt of islands that were recently so viciously battered by Typhoon Yolanda (Haiyan) along with a glorious week in Palawan which then and hopefully now was such a last frontier.

We loved it and ever since then, each year, I have hankered to get back. Wifey and I have a cardinal rule however that the price of the flight alone must not be be over £750 and the for the first time since 2004 we found a flight with Philippine Airlines for the magic number with the added bonus of being non stop. So we’re off!

Arriving mid afternoon in Manila after the thick end of 14 hours in a wide bodied sardine can is not entirely conducive to witty diary writing especially when you mix in the chaos caused by the insistence of Manila’s International Airport in placing all bags from all flights on the same carousel.

Getting into Metro Manila by taxi from the airport would be a breeze if it was not for the snarling and polluting morass of an average Asian city’s traffic and this is in a holiday period. Huge buses, Jeepneys, cars and taxis all vie for the tiniest piece of advantage particularly when there is a major left turn ahead where they all race along the right pulling in at the last minute. The resulting logjam is inevitable.

We must be getting soft as we pre booked our accommodation for the very first night of our trip back in the UK. Thirty five quid is not bad for a standard double room at the Lotus Garden Hotel, Merlati with an air conditioner and a great view of an unfinished lift shaft. We are only here for one night anyway.

I can see the appeal of all inclusive as task number one after the hotel bag drop is to trawl the numerous local money changers in search of the real rate so we can change dollars into pesos and hotfoot towards a beer and something to eat.

Something I am bound to come back to often is the sight of old, portly western men in the company of young, slim Philippine women. We find a bar (which looks familiar) and speculate on the status of the many quite odd couples we see around us.

Amusingly the bar’s star alcoholic offerings are Black Bitch and Bumpy Butt and every twenty minutes or so a group of tiny, tiny Philippina girls do a cheesy “Saturday Night” style formation dance seemingly for their own pleasure. The old, fat western predators ogle and leer. 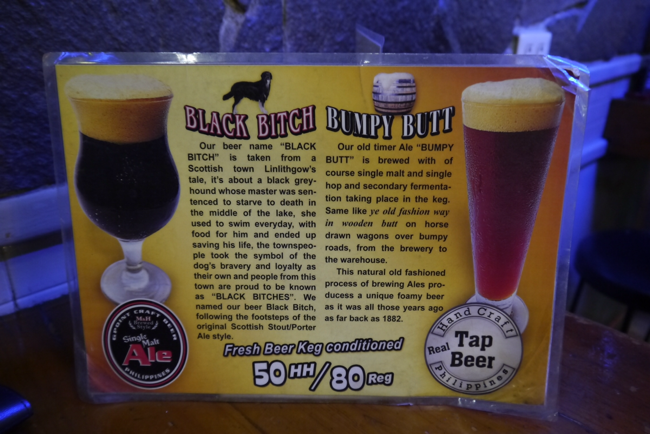 I am sure for many Manila has all they could possibly want but for me it’s a place to plan your arrival and departure very close together. It is somewhat difficult to travel in the Philippines and not transit through the city at least once but back to tonight, we have to eat.

No sign of of a portly Starsky or Hutch!

The last time I was here we ate once in the “Seafood Market” a kind of pseudo fish market where the shellfish are displayed in tanks and fish along a long ice table. It takes some time for me to locate it again as my old git’s memory was not supported by a blog back then but eventually we find it.

It’s really a large, garishly lit Chinese restaurant with open tables in the middle and flanked on one side by a succession of tanks and an ice table to display huge live lobsters, prawns the size of our lobsters at home and bizarre named fish such as Lapu Lapu and the (I’m sure) highly comestible “Fish Lips” At the front of the restaurant is a large glass enclosed kitchen where some 10 wok chefs cook what you have selected.

You run through this little charade of having your “shopping” placed in a tiny little shopping trolley but after checkout it is wheeled into the kitchen and some small number of minutes later whole grilled red snapper, bok choy in oyster sauce and a seafood fried rice are placed before you. Well that’s the plan.

Quite delicious but another of the mental tangles that serves for my memory unravels as we are eating. If you have anything grilled in the Philippines ensure you ask for “lightly grilled” to avoid mummification.

Writing this back at the hotel as Madam discovers that she has left her Kindle on the plane, she’s not a happy lapin. We leave Manila tomorrow via the same airport destined for the aforementioned Island of Palawan but right now it’s just turned lunchtime back home so time for bed Zebedee.