Maybe I could have planned this a little better but a 3am train is not so bad considering that I am having a beer and something to eat at around 6 when it’s dark and fast asleep by 9. I remember falling into this pattern of early nights and even earlier mornings whan I last travelled in India alone.

I have never been to an Indian railway station soe arly before. Nothing much changes except that the bodies you see on their feet in the day are asleep on the hard floor completely covered by grubby blankets at night.

The long distance rail service here is truly 24 hours and the services that go with it are also round the clock. The food stalls on the approaches to the station are still cooking even at 2.30am. Bizzarely I pass a stall with an audience of about 20 all awestruck in front of a small TV showing some form of what looks like Indian slapstick. Perhaps it’s a drama what do I know? All at mega volume of course.

I sometimes feel that you can set your watch on the train being late until of course you actually do and it will run on time. My train the Kamayani Express, is running 40 minutes late. At this time of the morning it hardly matters.

People are asleep everywhere. Some on mats, others on bits of cardboard but all on the hard station or platform floor. One group is directly under a loudspeaker constantly announcing arrivals and departures. Another guy is in the Indian squat position with his back against a wall and his forehead resting on his knee. He is clearly fast asleep. Maybe that’s why cheap Indian hotels are so noisy. They can sleep through anything.

A slight aside. I have a mini disaster on my hands. One of THE most important things to bring to India if you intend to stay in budget lodgings are the best earplugs you can find. If you value your sleep tis commands high priority.

I found these special foam earplugs that you roll into a thin tube, insert deep in your ear and let them take their original shape and all but the shrillest noise is completely blocked. I bought a pair and 2 spares just in case. One pair is lasting about 5 nights before expiring. Last night the second pair became ineffective. That’s why they are sold in packs of 10. Doh! I may have some interrupted sleep towards the end of the trip.

I have booked myself in train class 2AC which is similar to the sleeper class described in an earlier post but there are only 4 berths instead of 6, the cabin is air conditioned and it is more comfortable. I have been assigned a lower berth which is not good as it becomes the seat for 2 passengers during the day. However, already in the compartment is an elderely gentleman and his granddaughter and they ask if I would swap her upper berth with mine so they could be together. Job done.

Despite my descriptions, Indian railways are vey efficient indeed. No sooner had the train cleared the station a guy appears and hands you a brown paper bag containing your pillow, sheets, blanket and face towel. No wafer thin mint on a freshly turned bed though, you get on with it yourself.

Suitably nested,, the overhead light goes off and it’s off to the land of nod again. The old boy, thankfully, does not snore as I am saving earplug power for later. But he spends the next few hours trumping for his nation.

The last few days have been fairly hard so it’s good to be lying on a bunk, reading, watching movies and of course, writing another chapter of war and peace. I resolve that when I get to Allahabad I will continue to do nothing for the rest of the day. Apart of course for the ever present requirement to sort the exit strategy.

Nature calls and you might want to skip this section. In a land where western women value a wet wipe higher than gold it is important to plan where and hopefully when you answer the call of nature. Indian public toilets are really not nice places to be. I’m in the posh section of the train so there is a toilet block either end of the carriage. This is a 12 hour journey so unless I can train my body to poo on demand at 2am then at some point I will need to go on the train. As so it proves.

One of the toilet blocks has western style toilet pans but you really would not want to sit on one unless you happen to be carrying several litres of Jeyes fluid in your luggage. The block at the other end is a good old fashioned squatter.

Indian pottery manufacturer with my kind of humour!

The floor is wet probably with water but you just don’t know and do not want to take chances. I’m not wearing shorts so roll my trouser legs up to beyond the knee to prevent my troosers falling in the mire, plant both feet firmly on the pads and assume the position as best as I can as, well how can I put this….. you have to fully squat to properly aim the drop!

You almost certainly know that in India you never hand anything to anyone using your left hand as this is the hand that you use to take your shoes off, pick your nose and…. yep you guessed it. There is a tap and jug nearby aid the process.

I have on a couple of ocassions been forced to do this when I have been caught short without a tissue but have since learned my lesson. Properly adjusted I press the flush button and watch this little package from England disappear down a short pipe directly onto the track!

I will let you imagine foryourself the conditions in standard sleeper where the toilets have to serve over 150 people!

Welcome to Allahabad. Breakfast anyone? 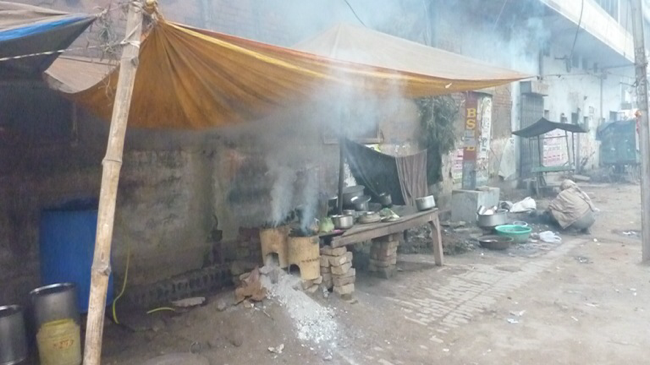 Arriving in Allahabad over an hour late and with the sun setting puts me in no mood to trudge around a new Indian city looking for a room so I check into the hotel Prayag a short walk from the station. I have what can best be described as a windowless cell with an attached bathroom where hot water is delivered in buckets. Sound dreadfull and Ok it’s spartan but no window means reduced traffic noise. Also at 275 Ruppees (3.50) I’m not complaining.

Gagging for a beer so I’m off.