Travelling Billy no mates has distinct advantages but one of the down sides is that you often find yourself with nothing to do in the evening.and there is only so much shooting the breeze with the locals one can do. It also explains why this journal has become War and Peace’s younger brother.

As happened the last time I travelled alone in India I am finding myself tucked up asleep at ridiculously early hours. So it was last night. Upset about the poor cow you see.

Early to bed early to rise so here I am at 7am strolling around a chilly Orchha seeking chai and breakfast watching the women set up the vegetable stalls (it’s seems to be always women that do the work in India) and the men making the morning’s Jalebis.

Cooking up Breakfast on a Chilly Orchha Morning 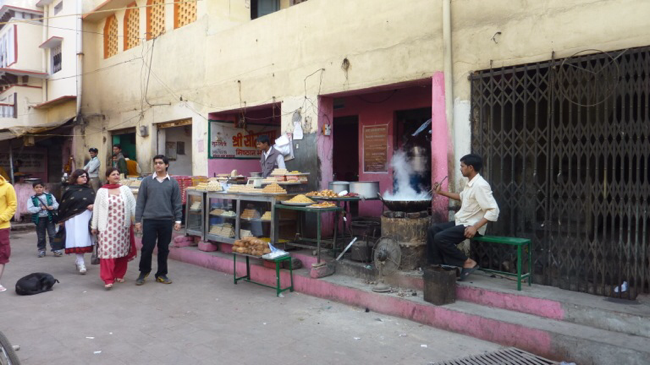 I stop for masala Chai and Jalebi. Chai is obviously tea but masala chai is slightly spiced and flavoured with cardamon. The tea leaves, milk, copious quantities of sugar and spices are boiled up together in a beaten up old pan over a butane rocket launcher. It foams away until the chai whallah is satisfied before being poured from a height through a sieve into small glasses then served. Traditional chai whallahs use small earthenware pots to serve their chai in. When you have finished your drink you smash the pot into the gutter. Very green. These pots are being replaced by small plastic beakers and these sadly are also thrown onto the street. Not so green

Jalebi are whirls of batter deep fried then dipped in a orange coloured sweet syrup. There are a bit sweet and syrupy for breakfast but are quiet delicious. India seems to go to work on chai and jalebi.

A big Langur monkey that has been surveying the scene from parapets above makes a couple of raids on the stalls stealing anything edible it can. The dogs are absolutely terrified of it. It sits on it’s parapet out of reach chewing on something stolen when from the opposite roof someone sets firecrackers off to scare it off. It was probably the same animal I saw later on making raids on tourist’s bananas.

Orchha’s main attraction is a crumbling medieval palace complex built onto a rocky promontory in the bend of a river reached by an acient granite bridge and, as I am to find out a laid back, Indian vibe missing from touristy Khajuraho.

It’s early and when I arrive at the palace complex the ticket office is shut an no-one can tell me when it will open. As I am trying to bunk in the ticket man arrives.

There are 2 main palace buildings along with stables, pleasure gardens and supplementary buildings for big nobs in the royal court. All of the buildings are crumbling to some degree but the 2 main palaces are huge. As I am entering the first palace the Raj Mahal the ticket inspector offers to unlock the King and Queen’s bedrooms which have rich Hindu religious murals on the wall and ceilings.

The murals are fabulous but I suspect that they keep these unrestricted access rooms locked until the first westerner arrives so they can extract a little baksheesh. It is a small price to pay to have the place entirely to myself. That is rare indeed in India.

The palace is built on levels with precarious walkways connecting rooms and balconies. At the very top of the palace are domes flanked on all corners with chattris, smaller domes supported by 4 legs or posts. 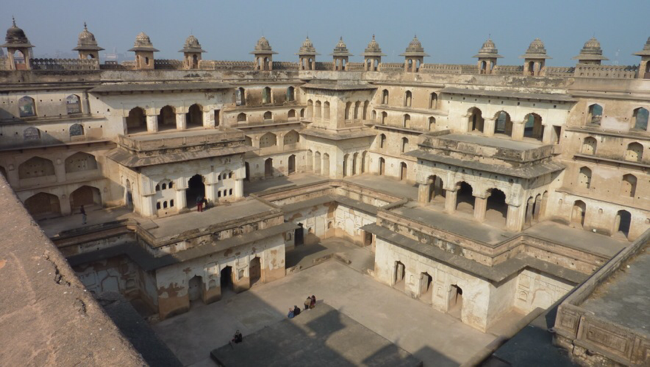 To get to the upper levels there are small, very steep staircases in the corners. As I am climbing to the top tier I round a corner only to come face to face with an enormous vulture sitting on the balcony rail. I know not who shat first but I saw his as he dropped of the rail and flew away. The vultures nest at the top of the dome and the chattris below. They are HUGE birds up close.

Heights and my gonads are not good bedfellows so I spent as little time as possible up high and retired down to ground level. disappointed that the small art gallery close by to the palace is now closed to the public as according to the guide it has a fine collection of Madhubani painting.

Orchha reminds me very much of Hampi in Karnataka. It has a wide boulder strewn river meandering through, an enormous temple in the middle and dilapidated monuments dotted around here and there. It also shares the sheer vibrancy and excitement that a real Indian community can possess.

There are a number of working temples in Orchha dominated by the Ram Raja temple around which the village centres and rotates. In the square outside the temple pilgrims and holy men sit on mats in bedraggled groups banging on drums and blowing into those funny flute things with a bowl on the end. Joss stick smoke curls over the whole scene adding a very familiar scent to me and cows saunter around as if they owned the place. Add in the general hubbub of a busy Indian market village and the result is an assault on the senses that no other country that I know can deliver. Quite magical. 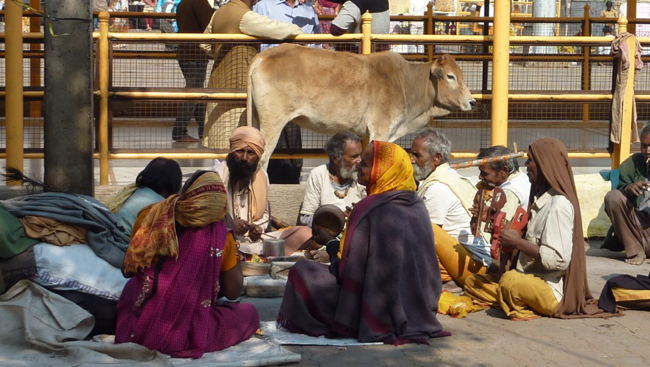 Whilst climbing around the palaces I could hear Indian pop music at stratospheric volume coming from the village below. Nothing unusual in that, Indians do everything at full volume. I stumble across the source of the noise. There is some sort of religious festival going on. I know not which and there is no point in asking as the answer will be beyond me.

A guy that looks about 200 years old in orange turban and robe who I am assured is a “God” sits in a trailer wagon surrounded by young boys (nothing new under the sun!). The trailer is connected to a tractor and both are garlanded with reams of bright flowers. In front is something very Indian. A Land Rover with a snarling diesel generator strapped to the front. The generator is to provide power for the massive banks of amplifiers and huge speakers that are set in piles at the back of the vehicle. A couple of young “DJ’s” try to look cool plugging and unplugging jack plugs and twiddling their knobs. It’s not making any difference, all of the amps are cranked to maximum, the green columns are all topped with red and the volume is painful.

The holy man does not seem to mind, he is serenely reading his prayer books. There is however a suspicious looking bulge either side of his turban. I speculate that he may have headphones on having a quick tune to radio 4.

Two horses are between the Land Rover and the tractor with their handlers. They begin to knicker, buck and kick. At first I think that like all animals subjected to such crap music at such a volume they are terrified and are rebelling. But not so, it’s clear that they have been trained to do this. 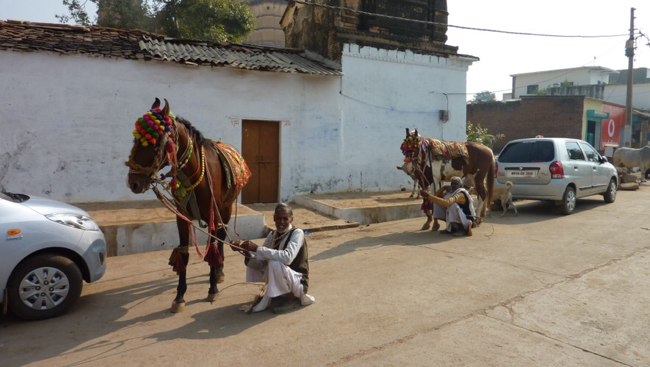 The cortege sets off up a road surrounded by a big crowd many with drums as if the racket was not sufficient already. It stops at some doorways and the horses are made to perform their strange rocking dance in front of the door. Quite bizarre. I have absolutely no idea why this is happening so move on to stop my ears bleeding.

I walk some 1km west of the village to a huge Lakshiminayaran temple sitting on top of a bluff overlooking the whole area. It’s 17th century and crumbling like the rest of the monuments but it has some fine remnants of painted murals within. It resembles a fort from the outside but every bit a temple within.

There is a tower that juts up from the second layer of the temple which you can in theory climb to the top of but the granite steps are so exposed with no rail my gonads appeal and they win the day. 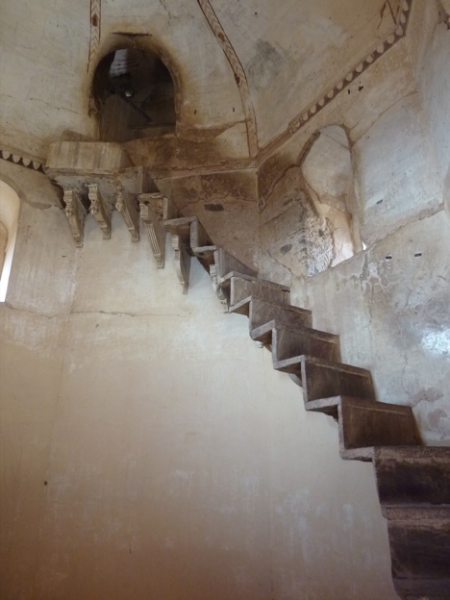 Finishing the day with a brief visit to the Orchha wildlife reserve for a bit of peace and amusement watching the monkeys bicker chase and roger themselves silly. It’s rapidly approaching dark and the sunset over the Centotaphs is quite…… well see for yourself. 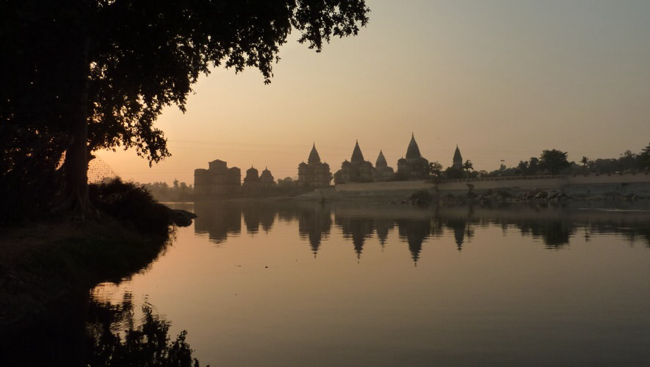 Orchha is a magical place, I’ve taken more pics today than in the whole trip. I thoroughly recommend it. Leaving tomorrow for Bhopal and then on to Sanchi. Hopefully!